In spite of being severely allergic – I love drawing horses. I love realistic drawings, as well as stylised ones from different cultures.

There are many famous horses in mythology: The Viking god Odin had a powerful eight-legged horse called Sleipnir. The Persian hero Rustam’s horse companion was Raksh, and ancient greek stories

abound with horses, even winged ones!

Irish mythology abounds with famous charioteers, and the steeds they controlled.  Probably the most famous are Liath Macha (“grey of Macha”) and Dub Sainglend (“black of Saingliu”),the two chariot-horses of the hero Cúchulainn and their driver Láeg.

Both horses magically appear to Cúchulainn from the pool of Linn Liaith in the mountains of Sliab Fuait, a gift from either Macha or her sister the Morrígan. Cúchulainn leaps onto their backs, and they run around Ireland for a day but cannot throw him off, after which they are tame.

On the day of Cúchulainn’s death, as his enemies gathered for battle, Liath Macha refuses to allow Láeg to harness him to the chariot. He only relents for Cúchulainn himself, but weeps tears of blood.

The sons of Calatin had prophesied to Lugaid before he threw each spear that it would kill a king. When he challenges them each time, they respond that he had killed the king of charioteers and the king of horses.

For the Celts, horses have always been important. Ancient

Irish culture had goddesses associated with horses (Epona, Macha) and rituals connecting horses with kingship were recorded by Geraldis Cambrensis in the 10th century.  This ritual has been connected to other Indo-European customs, going back to Vedic times.

Under the penal laws, Irish people were not allowed to own property equal to the value of a horse. Thus cutting them off from a financial and a cultural icon.

Here are some of my own drawings 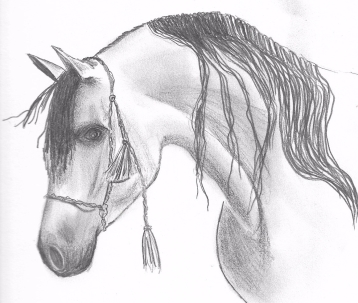 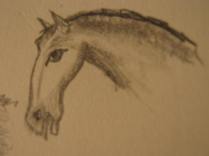 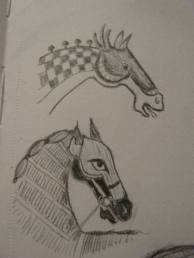 From Russian laquer boxes (definitely the most romantic!):

This one is from China