Well – I am back from Old Songs. I had an amazing time. Caught up with old friends – and made some new. Heard some amazing sea chanties at the song session Sunday night – and listened for a while to the French-Canadian fiddle session with my friend from Ottawa James Stephens. 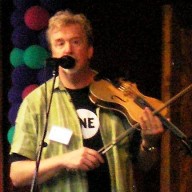 James on the Old Songs stage with his new fiddle

He had just purchased a new 5 string fiddle from my booth neighbours – a delightful couple from the Adirondacks: Pat and Brad Higgins. Brad spent years repairing violins – and noticed that they always had the same problems – so he designed a new one to address those problems. Apparently James had his eye on  these fiddles for 9 years – and finally made the leap!

It’s a very beautiful instrument and has gorgeous tone. I can attest to that as I listened while numerous people dropped by to try them out. From Irish to bluegrass to classical – they all sounded great! Brad’s fiddles (which he humourously calls “Bradivarius”) have been getting a lot of attention. Natalie McMaster has one, and Donnell Leahy. And now James. (apparently Canadians really like his fiddles 😉

Festival founder and director “Andy” Spence (now in her 70’s) and her amazing volunteer team spend the entire year fundraising to make Old Songs happen. And while she gets lots of support – many more people just don’t realise how much work goes into making a festival like this happen. She does it for one reason only – because she LOVES the music. And she understands the importance of these gatherings in preserving it.

As someone who has been attending festivals for years I can tell you that there has always been something special about Old Songs. While all the other festivals would often have an identical line-up (taking advantage of whoever happened to be on tour) Old Songs always has something different.  Always something that I have never heard before that is amazing.

But I also benefited from Andy’s personal patronage as she has purchased an animal brooch from each of the 23 years I have been attending this festival. I am sure she has more of my work than any other single person! This year she got the Scythian Stag.

Sadly this festival struggles from year to year to make ends meet and to continue to do their important work. Put it on your calendar for next year! You won’t regret it!