Since my work is inspired by folklore and myth – a piece always starts with a story.In Irish folklore the otter is often characterized as a friendly and helpful creature, and is given the name ‘water dog’. In the Irish story The Voyage of Maelduin, otters bring the sailors salmon to eat, collecting firewood and cooking them as well. The Voyage of Brendan tells of how an otter similarly assisted a hermit. St. Cuthbert is the patron saint of otters, and after standing waist-deep in the North Sea during his nightly prayer vigils, two otters would come and warm his feet with their breath and dry them with their fur.

But there are also traditions of the “King Otter” (a fairy or Sidhe otter), who is dangerous, and will devour any animal or beast that comes in its way. This otter is sometimes described as white with black rimmed ears and a black cross on his back, and sometimes as pure black with a spot of white on his belly.

In Scottish tradition, common otters are similarly benevolent, but there are also tales of ‘Otter Kings’. When captured, these beasts would grant any wish in exchange for their freedom. Their skins were thought to provide protection against drowning and to render a warrior invincible. But Otter Kings were hard to kill, their only vulnerable point being a small spot below their chin.

In Norse mythology, the god Loki killed the dwarf Otr while the latter was in the form of an otter. The dwarves were furious, and demanded compensation from the gods who gave them the otter skin filled with gold.

In ancient Persia the otter (again known as the ‘water dog’), was esteemed above all other animals, and a severe penalty was imposed on anyone who killed one.

When I am developing a grisaille, the first thing I do is make a stencil of the basic outline of the animal, and sift a very thin coat of opalescent white fines (32o mesh) very lightly on to the background colour. I then draw through it with a toothpick (sgraffito) to create basic shading. This serves two purposes: it minimizes the tendency of the paint to craze (develop fine cracks), and it gives me an outline to work with

After firing you can see how faint this outline is

Then I go ahead an use a painting white to give more detail – keeping in mind that this coat will go quite grey by the time firings are finished. This is a semi transparent white.

Unfortuntely as I chronicle this process I sometimes forget to photograph certain stages. I forgot to take a picture after firing this coat – and then I forgot to take a picture of the second painted coat – but this is what it looked like when it was fired. You can see that I added some detail (especially noticeable on the upper lip) and the two layers are already considerably softened. 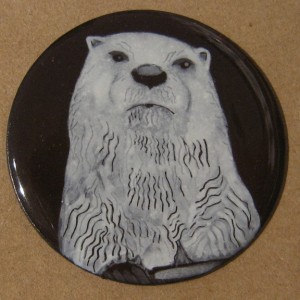 A third painted coat further develops both highlights and shadows. One has to think backwards from sketching – working towards the highlights, and leaving areas untouched that you wish to recede into the background.

The next firing further softens the lines 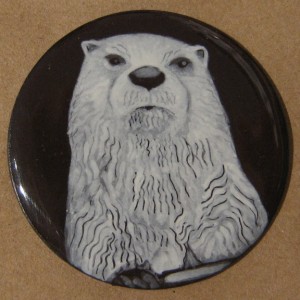 which is softened by firing. A friend described him as a ‘wise but slightly curmudgeonly fish eater” – which I thought was a very apt description! And very appropriate, considering the legends about him!