This was is the logo for MidAmeriCon II in Kansas City, MO this week-end. I was asked by Sam Press to design some awards, based on the logo, for the art show. I liked it so much I decided to re-produce it as closely as possible

I decided to work with stencils and start from the Yellow ground. This is Thompson 1238 Ivory. I use 100% rag vellum for my stencils. You can wet them over and over and they never lose their shape. The ability to wet them means they cling to the enamel surface very well and give nice clean lines.

Even though the layer was quite thick you can see that it didn’t cover completely.

I sifted the second layer

And it came off beautifully clean

It took three layers, in the end, to give a good cover to the black

To do the detail colours I sifted them down to 325 mesh so that the lines would be cleaner. They were too fine to sift evenly so…

I fired the purple (1780 Grape) first because it was a little harder than the other colours and could withstand another couple of firings.

Finally the most difficult and time consuming was laying in the black lines. This was the prototype 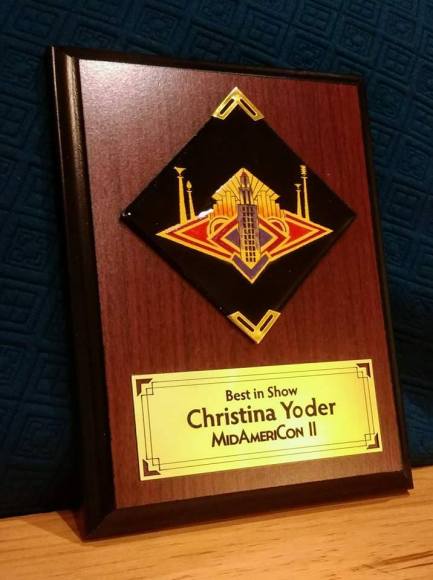 One comment on “Art Show Awards for MidAmeriCon II”

This entry was posted on August 12, 2016 by imagocorvi in commission, design, enameling, process and tagged enamel, enameling, MidAmeriCon II, stencil.