Once there was an orphaned brother and sister who loved each other very much. When their parents died, they promised each other that they would always care for one another no matter what happened.

Eventually they moved to another place where the brother opened a shop and married. But his new wife was jealous of his affection for his sister, and of her great beauty, and did everything she could to discredit her.

At one time, while they were both out the wife broke all the furniture, and blamed the sister. But the brother simply said they could buy more.

At another time, the wife killed his favorite horse and blamed the sister. But the brother simply said that the dogs could eat it.

Finally, the wife gave birth, and cut off her own baby’s head, and blamed the sister. At this, the brother took his sister and drove her into the forest, entangling her in a bramble. “Untangle yourself from that” he cried, but when she tried, he cut off both her arms and drove off.

The poor maiden didn’t know what to do, but soon small animals crept out of the forest and gently disentangled her, licking her wounds to heal them. The animals and the dew from the forest floor healed her wounds, so that she lived through the night, but she was in a very bad way. She wandered disconsolately through the woods, laying down on the ground to eat fallen apples and fruit to sustain her.

One day she found herself in a beautiful castle garden. She was just bending down to eat some fallen fruit when the castle servants saw her. She was so filthy from rolling on the forest floor, that they thought she was an animal and were getting ready to shoot her, when the Prince rode by. Seeing her, he knew that she was human and being a kind man, he wanted to help her. 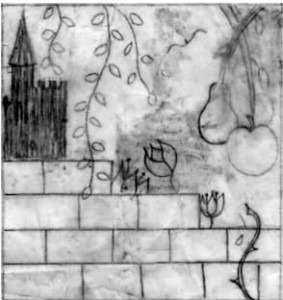 He ordered the servants to bring her in and clean her up and give her fresh clothes. When he saw her clean, and with the new clothes on he saw that she was very beautiful. He pitied her for her mutilation, and the pity turned to love, so he decided to marry her. He had his best craftsmen make two beautiful silver arms to replace the ones she had lost, and they had a grand wedding. They were very happy and lived in the castle with the King and Queen, the Prince’s parents. Soon, the armless maiden was with child.

Just around this time, a neighbouring King decided to attack the Prince’s lands and he was forced to go away to war. He kissed his parents and asked them to look after his wife, and to write to him when the baby was born.

A few months after he left the Armless Maiden gave birth to a beautiful baby boy. As he had instructed, the parents wrote to him to tell the Prince the good news. But the brother’s wife, who had caused all the trouble in the first place heard about what was happening and she was determined to crush the sister once and for all. So she intercepted the letter, tore it to pieces and wrote another that said. “Your wife has given birth to a monster”.

When the Prince received this letter, he was very disturbed, but he wrote back to his parents saying “Take care of both of them until I return”

But again the brother’s wife intercepted the letter, and again she tore it to pieces. She wrote another that said. “Turn them both out of the castle. I never want to see them again.”

So the King and Queen, when they received these instructions from their son, tore the maiden’s silver arms from her, and bound the baby to her back, banishing her from the castle. 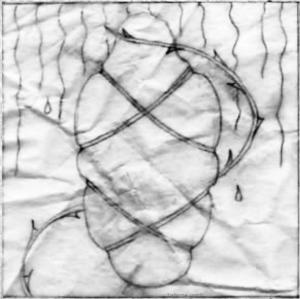 Again she wandered disconsolately through the forest, weeping in sore distress. For she didn’t know how she was going to care for her child, being all alone and with no arms. Eventually she came to a lake, where she leaned over to take a drink, for she was very thirsty.

When she leaned over, the baby fell from her back, and dropped deep into the lake. With a cry she leapt in after it, instinctively trying to reach out to protect her child. As she did so her arms were magically renewed. She grasped the child and carried it up to the shore. She was so happy to be able to care for her child, to caress it and to feed it, that she didn’t think of her other misfortunes.

She found a little cabin in the woods, and she swept it clean, and settled down there to care for herself and her child.

Meanwhile, the Prince had won the war against the neighbouring King, and had made his way home. He was shocked and horrified at the misunderstanding about his wife and son, and immediately put together a search party to go and find her.

They hunted for a year and a day before they found the maiden, and what was the Prince’s surprise and delight to find that she had her own arms, and that their son was happy and healthy. He begged her to return home with him. He explained that he had never wanted to send her away.

But she said: “When you married me before, it was out of pity. Now I am whole, and I want you to court me properly.” So he went back to the castle, and loaded all of his wealth into carriages to take to the Maiden for her dowry. “I love you with all my heart”, he said, “everything that I have is yours.”

So she agreed to go back to the castle with him. His parents had died, and he was now King, and she was his Queen and they lived there happily ever after.

This entry was posted on March 2, 2015 by imagocorvi in mythology and tagged armless maiden, drawings, folklore, mythology, stories.