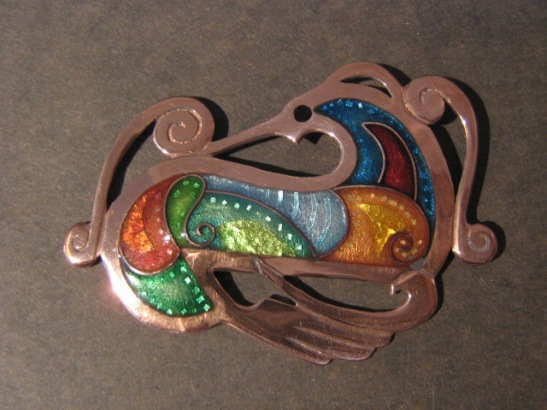 There is much debate among archaeologists about whether the Celts were influenced by the Scythians in their animal art. One argument against such influence is that there have been no joint finds of Scythian and Celtic material. An argument for such influence is stylistic similarities.

The Scythian deer is based on a piece of Scythian work from around 200 BC It has typical Celtic features such as spirals and the backward turn of the head, which was thought to indicate a sacrificial animal. The deer is revered in many cultures, being a commonly hunted animal. Mythology and folklore abound with stories of enchanted deer. It is thought that the Scythians believed that deer sppeded the slain warrior on his way to the other world.

From the Aberdeen Bestiary (circa 14th c):
“…deer are the enemies of snakes; when they feel weighed down with weakness, they draw snakes from their holes with the breath of their noses and, overcoming the fatal nature of their venom, eat them and are restored … They have another characteristic, that after eating a snake they run to a spring and, drinking from it, shed their long coats and all signs of old age… Stags, when it is time to rut, rage with the madness of lust. Does, although they may been inseminated earlier, do not conceive before the star Arcturus appears … if deer have few or no teeth, it shows that they are old. In order to tell their age, Alexander the Great ringed a number of deer; when they were recaptured a century later they showed no sign of old age … The offspring of the deer are called hinnuli, fawns, from innuere, ‘to nod’, because at a nod from their mother, they vanish from sight.s mother’s womb is a marvellous remedy against poisons. It is known that deer never grow feverish. For this reason ointments made from their marrow bring down sick men’s temperatures. We read that many men who have regularly eaten a small amount of venison since their early days have lived for a long time unaffected by fevers; but ultimately it fails them as a remedy if they are killed by a single blow …”

This entry was posted on July 29, 2013 by imagocorvi in champleve, mythology and tagged celtic, copper, deer, enamel, history, Scythian.