This piece is based on one that was found near the ancient Irish hill fort of Emain Macha
Three kings agreed to split the governing of Ireland among themselves, taking turns. When one died, his daughter Macha claimed the right to rule in his place and won her right to rule in a battle. Another died and his 3 sons claimed their father’s turn. Macha refused to give up her power, saying that she had won her right to rule through battle, and need not honour the previous agreement. She married the third king to consolidate her claim. She then went to the 3 dissident sons disguised as a hag. Each of them in turn were filled with lust for her because of the beauty of her eyes. She took them one by one to the woods, where she bound them. Her people urged her to kill them, but she made them slaves, feeling that this was a greater humiliation. She marked out a rath trench for them to dig with a brooch of gold “eo” that was at her neck “muin” so the place was called Emain Macha. 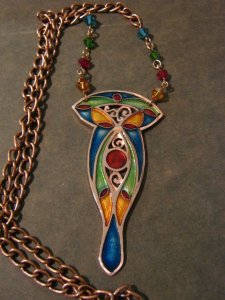 Another story about Macha tells of her husband Crunchu bragging at the fair that she could run faster than the King’s horses. When she was summoned to prove herself, she begged them to wait until after her delivery, for she was nine months pregnant. However they forced her to run, threatening to kill her husband if she did not. She ran the race and collapsed at the finish line just in front of the king’s chariot, where she gave birth to twins in great travail. She then cursed the men of Ulster to the ninth generation, that they would themselves suffer the pains of childbirth whenever they had greatest need of strength. That place was ever afterwards called Emain Macha (i.e. the twins: ’emain’ of Macha)