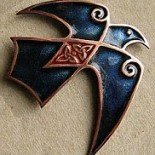 This was a really exciting commission that I got from Beeken Parson Furniture in Vermont. They had a client whose last name was also Crowe, and whose wife’s maiden name was Lamb and they had commissioned a table that included these images.
I had only just started making pieces in the grisaille technique – so I didn’t have the level of confidence that I did with champleve, which I had been doing for over 20 years.
What this meant was that I made a lot more samples before beginning the actual project. In order to show the clients what I could do I made two crow samples: 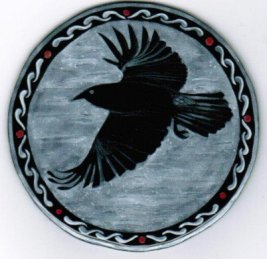 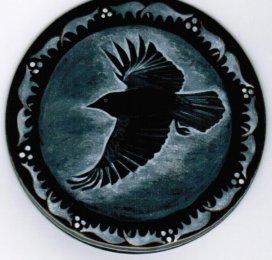 I sent the second one (my favourite!) as my bid for the commission and happily the client liked it so much that they bought it! AND I got the commission! 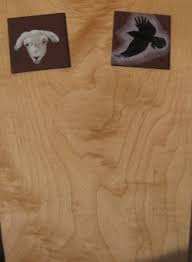 Now I had other things to think about. They didn’t want the traditional grisaille on black, as the wood for the table was to be light. I made a few samples on browns, but realised that I would have to see the wood before I moved on. So Beeken Parsons sent me a sample of the gorgeous burled maple. It then became clear that the base colour I would use would be mocha.

I needed to begin by soldering some posts on the back of the circles. Not being an experienced solderer I took them to my good friend Charles Jevons.
But from there – I chronicled the whole process by making videos as I went along, and sending them to the Crowe’s. That way they could watch the project develop and give any necessary feedback.
You can find the first in a series of ten here:

In the end, we just ran into one small problem. I had sent the copper discs to Beeken Parsons so they would know the exact size of the medallions. What I didn’t know at the time was that every time you enamel something it gets a little bigger: the copper expands, but doesn’t reduce back to it’s original size because the fused glass prevents it. So all the depressions that they had made in advance to take the medallions were too small! However they were able to overcome the problems and put the table together. 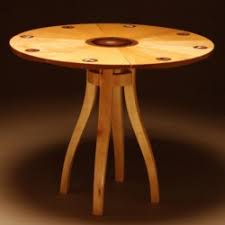 The large piece in the centre was a particular challenge, as it was 11″ in diameter (larger than I had ever made before. In fact it was so large that I couldn’t make it in my kilns. George Brown College generously allowed me to use their kilns – but it meant that I didn’t have much time. I only had three hours to finish it!

The next year I went and visited the Crowes in Vermont, and Beeken Parsons furniture. It was nice to meet them, and I was delighted to be able to put faces to the voices I had been conversing with.  Jeff Crowe told me that he carried the original crow in his pocket when he went golfing for good luck 😉

Below are detailed shots of the individual medallions – which were 3 ” in diameter. 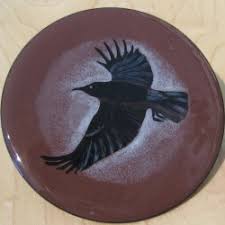 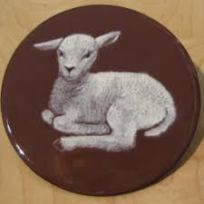 This entry was posted on June 1, 2012 by imagocorvi in commission, grisaille and tagged Beeken-Parson, commission, crow, grisaille, lamb.