After a cold and wet spring summer is suddenly upon us. In the past I would have been already on the road – but these days my schedule is greatly reduced. Not by choice! I miss my summers on the road, camping at beautiful state parks between shows. I thrived on the extremes – extreme solitude in nature and extreme socializing at festivals! But financial pressures and the way the world is changing have conspired to force me to find new ways to be and life on the road is out of the question. It hasn’t been an easy transition – changing the habits of a lifetime – but I am an optimist and and existentialist – so I believe that I CAN change – and that is half the battle.
Part of the secret is not giving up my shows entirely! And soon I will be off to Old Songs – certainly one of my favorites. I have been going to Old Songs for over 20 years.

I have many memories – like the gentleman who got the very obscure medieval joke that is my business name: “Imago Corvi”. He’s the only person who has ever gotten it. In 25 years of bsuiness. (Medieval manuscripts of the gospels each begin with their evangelical symbol Imago Utilus for St Luke, Imago Leonis for St Mark, Imago Hominus for St Matthew and Imago Aquilus for St John. Imago Corvi is the gospel according to me 😉

Among the many musicians that I deeply respect, I saw Martin Carthy there when he released his retrospective a few years back. It’s one of the few places I can see artists of his stature in a small and intimate setting. I was delighted that he brought some feild recording with him, of where he learned his songs – so I could make connections with where his style comes from. Old Songs is good at that – making connections.
It is at Old Songs that I have some of my most loyal customers. Generous people that have supported me over the year purchasing some of my  most expensive pieces – and thereby encouraging me to push the boundaries of what I do. Andie Spence the festival director comes to my booth every year and buys something. I know how long I have been going there by the number of pieces she has!

I often feel that Old Songs is a microcosm of what the world should be. Great music is at the centre. And dancing and storytelling. As a consequence of that – great discussions and great food: conviviality. Inclusion. Around the periphery a little commerce – but no one cares about getting rich – just making enough to get by and to move forward with their projects. Singing and playing around campfires late into the night. Creative, sustaining endeavours that give meaning and purpose to life. There is a lot of space for growth, for reflection and for re-assessing priorities and re-affirming principles.


Come and join me! 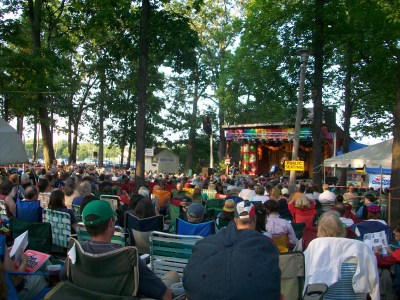